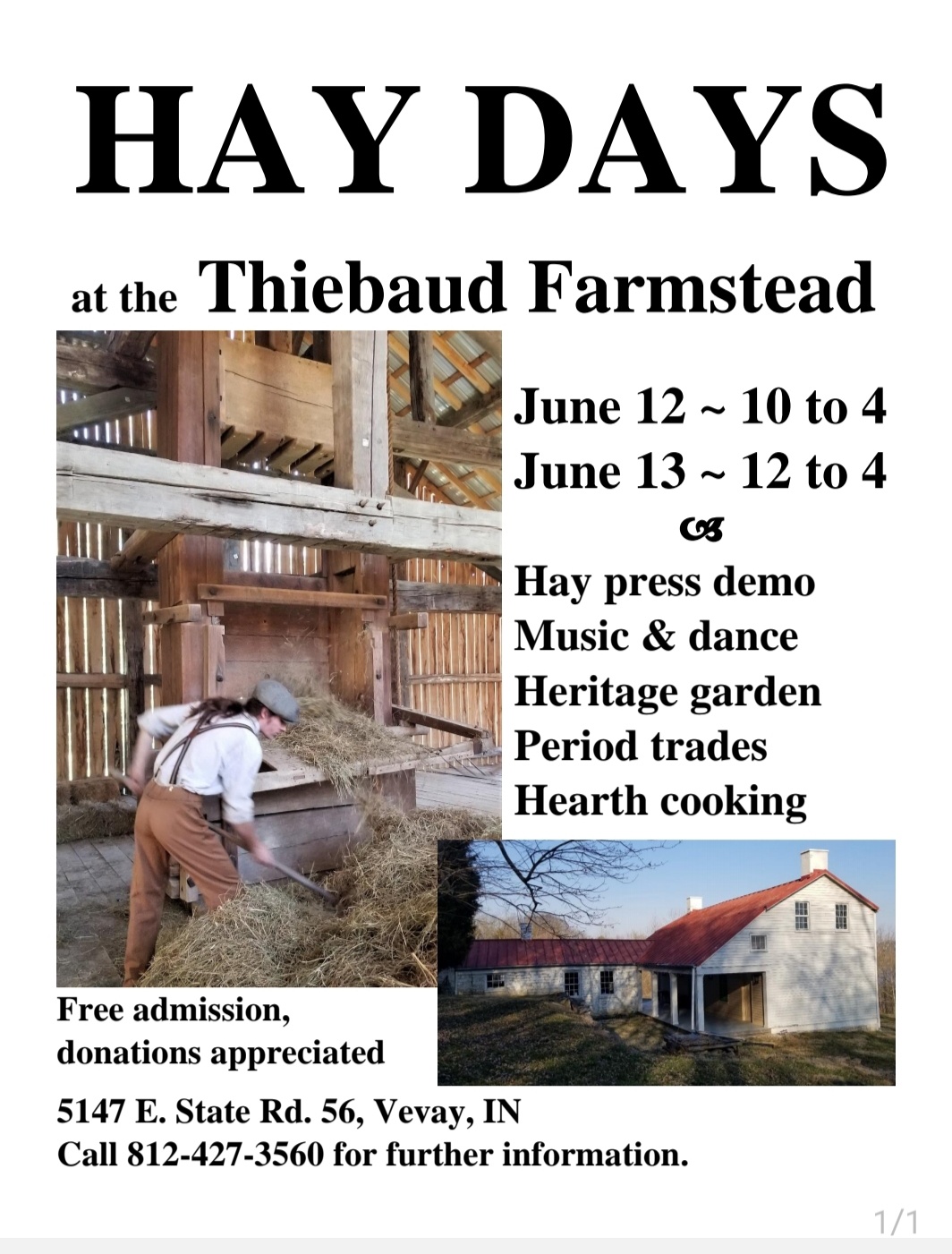 From Vevey to Vevay, Frederick and Harriet Thiebaud emigrated from the Canton of Neuchatel in Switzerland with their family of eight children in March of 1817. Frederick’s belief that land was the greatest inheritance he could leave his children drew him to Vevay, Indiana, named for Vevey, Switzerland, the place he had heard so much about from the early Swiss settlers.
And so begins the story of the Thiebaud Farmstead that will be celebrating Hay Days on June 12th and 13th. Justi Thiebaud, the youngest son of Frederick and Harriet, assumed control of his father’s farm at a time ripe for prosperity. The science and technology of American agriculture was expanding. Justi was an active participant in southeast Indiana’s hay culture that was bolstered by Samuel Hewitt’s hay press improvement known as the Mormon Beater Hay Press that was patented in 1843 in Switzerland County, Indiana. A hay press was built on the Thiebaud Farmstead c. 1850. The prosperity afforded by the increased production and marketing of hay allowed for Justi and his wife Mary Banta to build a new house c. 1860 for their family of ten children.
The restoration of their Greek Revival frame house and a hay press barn provides the setting for the Thiebaud Farmstead’s Hay Days. Reenactors will bring the site to life with mid-19th century activities. Hay press demonstrations will be at 1:00 pm both days, led by Broadus Thompson and assisted by Angus Thompson, who have been baling hay annually at our events since the restored press went into action in 2016. Blacksmithing is Broadus’ trade at Colonial Williamsburg, and he will be taking a break from his work there to participate.
The Thiebaud house will be bustling with period activities. Sundra Whitham and Melodee Stepleton will be in the east parlor using Mary Thiebaud’s spinning wheel and an 1850s sewing machine. The west parlor will be setup for weaving with fiber artist and weaver Teresa Beck. Fashion historian and seamstress Brenda Rice will be working with Teresa as they demonstrate traditional weaving techniques and give visitors an opportunity for some hands-on weaving.
Delicious aromas will be wafting from the kitchen where Geri Emmelman will be demonstrating the art of hearth cooking while preparing dinner for all the reenactors.
Sydney Dieterlen will be demonstrating the art of mid-19th century correspondence. Kirk Womack, Jr. will be portraying a traveling clock repairer of the mid-1850s, and talk about the American clock industry in the mid-19th century.
The Forget-Me-Not Historic Dancers will be livening up the breezeway porch accompanied by the West of Dublin trio. Storyteller flatboat-man Dan Bixler will be engaging guests with his tall tales. A small encampment of the Vernon Greys will give insights into the Civil War that was happening.
Numerous other activities of the time and tours of the site will be ongoing. Join us on Saturday, June 12th from 10 am to 4 pm or Sunday, June 13th from 12 to 4 pm. Free admission with donations greatly appreciated. 5147 E. State Hwy 56, three miles west of Vevay. For further information call 812-427-3560.